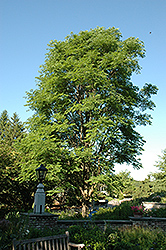 A stately large shade tree with massive yet delicate multiply compound leaves; narrow habit of growth, rather coarse outline when young and in winter, but very attractive when in leaf; tolerant of adverse growing conditions, a seedless variety

Stately Manor Kentucky Coffeetree has forest green foliage throughout the season. The large bipinnately compound leaves do not develop any appreciable fall color. Neither the flowers nor the fruit are ornamentally significant. The rough dark brown bark adds an interesting dimension to the landscape.

Stately Manor Kentucky Coffeetree is a deciduous tree with an upright spreading habit of growth. Its strikingly bold and coarse texture can be very effective in a balanced landscape composition.

This is a relatively low maintenance tree, and is best pruned in late winter once the threat of extreme cold has passed. It has no significant negative characteristics.

Stately Manor Kentucky Coffeetree will grow to be about 50 feet tall at maturity, with a spread of 30 feet. It has a high canopy with a typical clearance of 6 feet from the ground, and should not be planted underneath power lines. As it matures, the lower branches of this tree can be strategically removed to create a high enough canopy to support unobstructed human traffic underneath. It grows at a slow rate, and under ideal conditions can be expected to live for 90 years or more.

This tree should only be grown in full sunlight. It is very adaptable to both dry and moist locations, and should do just fine under average home landscape conditions. It is considered to be drought-tolerant, and thus makes an ideal choice for xeriscaping or the moisture-conserving landscape. It is not particular as to soil type or pH. It is somewhat tolerant of urban pollution. This is a selection of a native North American species.